To find out more at commissioning Kimmika's Plays for Production contact Kimmika at:
kwilli01@temple.edu 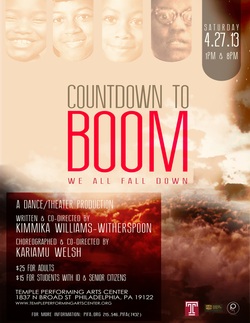 The bombing of the 16th Street Baptist Church in Birmingham Alabama on September 15, 1963 was an unprecedented act of “domestic terrorism” long before the term would ever be applied. It would be decades before America’s violent racial society admitted that treatment of African Americans since the early days of enslavement had always been predicated on a particular brand of “nationalized” terrorism. Few people remember their names; but Addie Mae Collins, Cynthia Wesley, Carole Robertson and Denise McNair’s senseless death became the turning point of the entire Civil Rights Movement. Filled with the passion of dance sequences, gospel, down-home blues and freedom songs, Countdown to “BOOM” We All Fall Down, takes a poignant look at a memorable day on the linear graph of history’s kaleidoscope that touched/changed a nation while capturing the music, the look, the feel and the movements of a Sunday morning in the south.

"La Baker" The Life and Times of Josephine Baker

"La Baker" The Life and Times of Josephine Baker. A collaborative piece by choreographer Kariamu Welsh and playwright Kimmika Williams-Witherspoon and students from the dance and theater departments. Sponsored in part by the Temple University General Activities Fund and the Rose Vernick Fund. Part of the Philadelphia International Festival of the Arts (PIFA).
SHOT!  (Requiem for a Bullet)
Chosen from a pool of 526 collegiate plays, Shot!, the first Temple Theaters production invited to appear on the national stage, will perform at the Kennedy Center American College Theater Festival.

Temple Theaters’ Shot! is performing at the Kennedy Center American College Theater Festival tomorrow, marking the first time a Temple theater production has been invited to do so on the national stage.

The short drama was chosen from a pool of 526 other collegiate plays and musicals to be judged at the regional competition, which took place in January at Indiana University of Pennsylvania. Last month, the production was selected out of a national field of 53 colleges under consideration to perform during one of the three time slots available at the national festival in Washington D.C.
Full the Full News Article Click Here

SHOT!!  tells the North Philadelphia story from the inside   Temple Theaters’ latest production goes beyond the stereotype and reveals the often overlooked story of the area and the people who call it home

Associate Professor of Theater Kimmika Williams–Witherspoon refuses to let the young men and women of North Philadelphia be written off as thugs.

Tied together by circumstance, they build family beyond blood bonds, claim neighborhood blocks as their own and mark their territory with graffiti tags. But their stories are blunted by media images that depict their community in a negative light, creating an image that is both simplistic and distorted.

In SHOT!, Temple Theaters’ latest production, Williams-Witherspoon goes beyond the stereotype and reveals the often overlooked story of North Philadelphia and the people who call the area home. Through poetry, interview material and documentary images, playwright Williams-Witherspoon and director Doug Wager paint a portrait of north Philadelphia’s history and the residents who have lived, worked and raised families in the area for generations.

SHOT! grew out of an oral history project by Williams-Witherspoon and former BTMM professor Eugene Martin. With funding from an interdisciplinary seed grant, the two worked together to document the urban history of North Philadelphia.

As she began to compile pages of interviews with local community members, politicians and activists, Williams-Witherspoon saw an opportunity to turn the text into a work of art. The original script — which focused on the women who anchor households, survive incredible odds and struggle to make a living for their children, grandchildren and family members — evolved into a story about North Philadelphia’s past, present and its struggle to survive in to the future.

“I didn’t want this community to be perceived as victims of their environment — they are not victims at all,” she said. “The North Philadelphia we see today is not what it always was. This didn’t happen overnight.”

SHOT! begins during the riots of 1964, which were spurred by tensions between area residents and police. More than 200 stores were damaged or destroyed in the three days of rioting and never reopened. The disappearance of commerce was a huge blow to the area. From that point on, the area began a steady decline, Williams-Witherspoon explained.
Click Here for News Articles from Temple University News on SHOT!

SURVIVAL STRATEGIES -  By Kimmika L. H. Williams-Witherspoon
Every parent who watches the news today (with so many children at risk and the precariousness and violence of our time) has had to reflect on what personal sacrifice we, collectively, and individually, would make to save a child. Survival Strategies: A Tale of Faith, is a gritty but, gripping, drama about one Christian mother’s last ditch effort to reclaim her only child from the throes of drug addiction and what lengths she is willing to go through to save her daughter. Survival Strategies is based on a true story about a West Philadelphia woman who, despite disappointment after disappointment, resorted to “the unthinkable” to save her only child from “crack” cocaine addiction. Not for the faint of heart, this piece by offers a unique look at the pervasiveness of contemporary drug culture and how it has negatively impacted the Black community. Although the script won Kimmika Williams the PEW Charitable Trusts Award in Scriptwriting in 2000 and a scene from the piece was staged at the Painted Bride Art Center that year, because of its gritty subject matter, this is the first time that this play will receive a public reading. (Survival Strategies uses extreme language and situation. Parental guidance is suggested.) CHARACTERS: Mrs. Gertrude Power (Gertrude means “warrior woman”) Power (Bernadine means “brave as a bear”.) Sister Wooten Police Officer #1/Drug Dealer Police Officer #2 Repairman.

From the PEW ARTS Review...
As the intensity of Kimmika Williams's play "Survival Strategies: A Tale of Faith" builds, drug addicted Wilhemenia - who prefers to be called Billie - shouts at her mother/captor, "This ain't no god damn drama!" But that's exactly what it is, and in Williams' starkly drawn world, a mother's love is dramatically contrasted against a daughter's self-destructive inclinations. Mrs. Gertrude Power goes to nearly unimaginablydramatic lengths to reclaim her daughter, but the revelations which occurs to Wilhemenia - including an epiphany in which she realizes that the ties which bind mother and daughter are more lifelines than fetters - dawn slowly and gently. In transporting life at the edges of society to center stage, Ms. Williams's writing retains some of the gritty realism of her journalist's education, and is counterweighted by a poetic sensibility and an ear for spoken language. The machinery of drama is carefully tooled with the words and rhythms of daily life, even as the drama escalates to hyperbolic levels. In an age awash in "reality based entertainment," where audiences are encouraged to believe that drama is accidental, Ms. Williams participates in the blurring of boundaries between street and stage. But her work and words deny the prurient, voyeuristic appeal of so-called "reality," instead pointing toward a more vivid reality; one which directed by theater itself.

AT WHAT PRICE UNITY - By Kimmika L. H. Williams
The ever present now. PLACE: The action of the play takes place in a neighborhood corner bar on 52nd and Market Street in West Philly called Club Zulu. Playing TIME: About two hours. When efforts to catch a serial killer, preying on Black women in West Philadelphia fail, a band of young men –a pimp, a hustler, a drug dealer, a homosexual and the neighborhood psychic who sells incense, take matters into their own hands, patterned after the Zulu Warriors for which their neighborhood bar is named. STORY: AT WHAT PRICE UNITY is a contemporary drama that deals with two of our most prevalent urban phenomenon in the black community--drug addiction and violent crimes against women. The play depicts a dichotomy of characters in an ever-changing urban neighborhood--that would probably exist mutually exclusively--if women in the neighborhood were not being stalked and killed. When the murders start to hit home--a mother, a grandmother, a girlfriend, a daughter--these contemporary misfits must find a way to ban together and attempt to solve the crimes; but, at what price: unity?

DOG DAYS: THE KILLING OF OCTAVIOUS CATTO - By Kimmika L. H. Williams
While Mrs. O'Leary's cow was starting a fire in Chicago, Philadelphia was burning in a fire all it's own. This new, historical docu-drama, Dog Days: The Killing of Octavious Catto, is based on the life and death of the handsome, young and charismatic Octavious Valentine Catto. O.V. Catto rose out of Philadelphia's "colored ward" in the early 1800's, to become a champion of civil rights, a voting rights activist and a noted educator with the Institute for Colored Youth, (that was to later become Cheyney University) and for a brief moment in time, united a community, long before men like DuBois, Garvey or Martin Luther King, Jr. could look towards a similar dream. Brutally murdered on Election Day, in 1871, Catto's death touched off one of the most incendiary race riots that Philadelphia was to ever know. This riveting piece by Philadelphia playwright Kimmika L. H. Williams, resurrects Catto's memory and a piece of history from the grave! Characters:

Productions and Readings of Kimmika's Plays